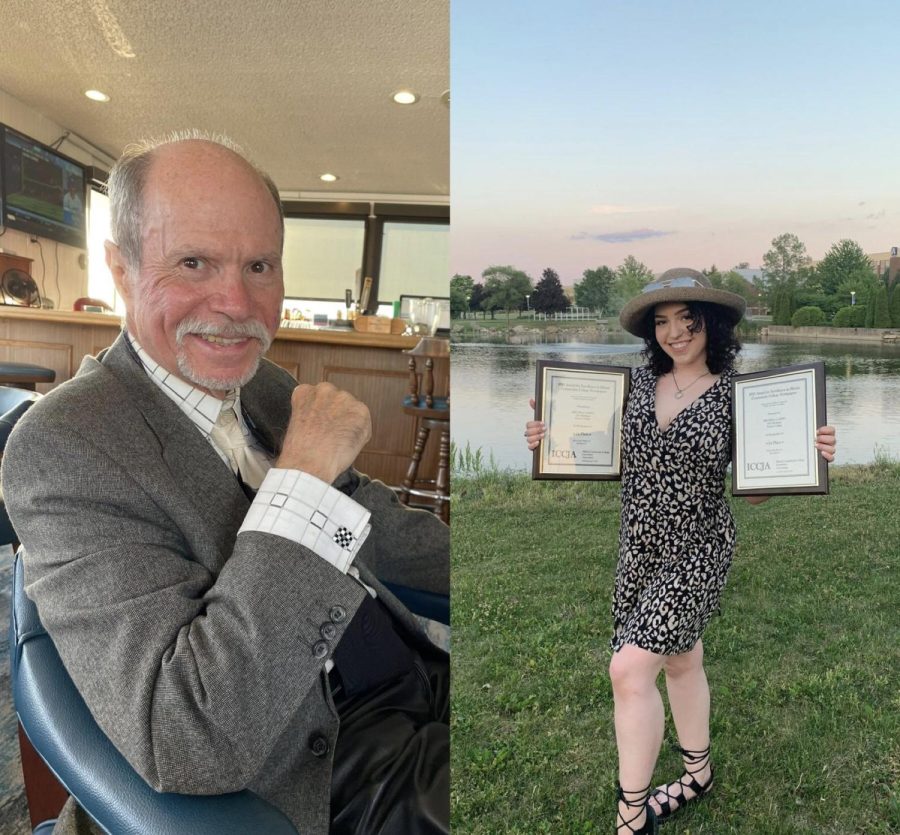 Garry White was editor-in-chief of The Harbinger when attending in the 70s. 40 years later, his granddaughter, Micaela Gaffo, took on the same role. (Photos courtesy of Micaela Gaffo.)

Even at its most well-intentioned, communication between older and younger generations is often stifled by a single cliché: “You know, when I was your age…”

Year after year, at family dinner tables the world over, these words are uttered and are often met with a preemptive wince from the young. What follows might actually end up being a lovely story, but we’ve come to expect a monologue about having to trudge six miles uphill through the snow just to get to school every morning.

But for Harper student and former Harbinger editor-in-chief  Micaela Gaffo, a day of catching up with her grandfather led to a notable discovery: during his time as a Harper student in the 70s, he too wrote for The Harbinger.

“It was awesome to learn…I was so excited, and it created more of a bond between us,” Gaffo described.  “Like, oh my gosh, now there’s something more in common, something more to talk about.”

Gaffo’s 70-year-old grandfather, Gary White, wasn’t just a former writer for Harper’s student newspaper — he was an editor-in-chief as well, and one of the first The Harbinger ever had.

White and Gaffo are not related by blood, as White married Gaffo’s maternal grandmother after Gaffo’s mother was born.  But he’s definitely “grandpa” Gaffo explained.

This past summer, Gaffo visited her grandpa in Laguna Niguel, California, where he now lives. Moved by the discovery, Gaffo decided she wanted to record conversations with him about his time on the Harbinger. She knew she wanted to share this story.

Gaffo said their bond grew to a new level after the two talked for hours about the Harbinger’s history, what it was like writing for the publication, amongst other details of their shared experience.

During her time as editor, Gaffo earned two first-place titles for her writing and coverage of Chicago’s Black Lives Matter protests in May 2020.

It was a story that Gaffo said was one of her easiest to write, as it was simply a matter of being “authentic and honest about everything that happened and her point of view.” It was not just about informing her readers about an event, but more importantly, it was about sharing an experience.

White shared that he was drawn to the newspaper for very similar reasons.

“The biggest reason The Harbinger was important to me was because it was an outlet with no limits — it was totally a place for me to say what was on my mind, whether I was right or wrong,” White said, chuckling.  “But it taught me a lot…especially now,  looking back on it. And having the opportunity– that’s the key.”

A native of Northbrook, IL, White’s time pursuing his associate’s degree at Harper College spanned from 1970 to 1973, though there were occasional speed bumps and false starts throughout. He had already become an actor as soon as he graduated from high school and often had to drop his classes when he’d become too preoccupied with a new show.

Nevertheless, upon his return he’d always begin writing for The Harbinger again, mostly for his regular column entitled Column A: A series of editorials devoted to politics, both abroad and at home on Harper’s campus. Much of his writing took on a comedic, often satirical tone, lampooning both the “apathy” White saw as endemic throughout Harper’s population as well as the school faculty.

One particularly memorable excerpt from a 1971 edition of Column A is written as a mock “help wanted” ad for The Harbinger staff in which White wrote:  “Must ultimately be prepared to daily face Harper’s myriad of freaks, weirdos, perverts, pompous bureaucrats, transvestites, senators, nymphomaniacs, and even some students.”

“I was very much the maverick of the [Harbinger staff],” White said. “I was on the staff to be the far left, the guy on the absolute farthest of the left. And I fulfilled that, I think! … [We were] a lightly connected group of extroverts, who all wanted to accomplish something and didn’t know how. And we thought that the paper was probably a great start.”

White explained that he actually became editor-in-chief simply because someone else quit.  It was early enough in the paper’s making that the rules weren’t exactly set in stone, according to White.

“Back then, The Harbinger seemed more like going into a sitcom than it seemed like going into an office,” White described. “Whoever had the ideas that seemed to be the most important, that was the way that we went.”

Two years after a 1965 referendum to create a community college in the Palatine area, Harper College officially opened its doors in 1967. The Harbinger, initially called The Harper Grove for a single issue before changing its name to what we know today, was founded during that same year, making it the longest-running student newspaper in the school’s history.

According to Harper College archivist Bridget Lerette, most of The Harbinger’s coverage during these early years was concerned with the unique issues inherent to a school that’s beginning. News stories were mostly about topics like the construction of new buildings on campus, or the establishment of school policies on issues like smoking on school grounds.

Opinion sections like Column A were also popular among student journalists as responses to the growing pains of Harper at the time, and as a way for students to express their thoughts on larger issues that affected their lives, like the ongoing Vietnam War.

Lerette is perhaps more familiar with the timelines behind the school’s various student media publications than anyone else at the college. She estimates that around 30 percent of the documents she oversees strictly come from student media.

As it is the job of an archivist is to organize such documentation, not only for future reference but also for historical record, this means that just under a third of the school’s history is written by a long lineage of student journalists — a lineage bookended by White in the past and Gaffo in the present.

“[Student media] documents the history of what the students are thinking at various points of time,” Lerette said. “It’s useful for getting a feel for what the students care about and what’s affecting their lives, and that’s very important. It helps build a richer historical picture of what’s happening at the college.”

This fall, Gaffo began attending classes at the University of Illinois-Chicago as a commuter student, pursuing a degree in sociology — which was also White’s first intended major when he began his higher education.

Very much like his granddaughter, White said he excelled most as a journalist when he was channeling his own personal experiences. There was an independence to it that he refers to as “shooting from the hip,” one he thought was refreshing in how different it was from the scripted world of theater he was used to.

All these years later, reminiscing about his days on The Harbinger has become more meaningful. It’s no longer just about communicating an experience to the masses — it’s about the experience itself, and what it means to share it with your granddaughter.