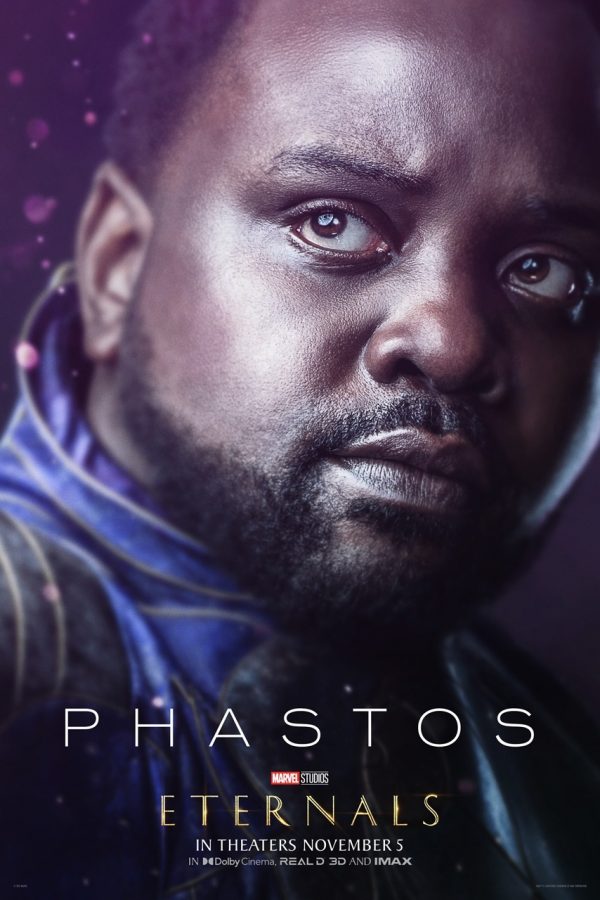 Marvel should be applauded for their character Phastos in the movie Eternals.

Phastos is a queer person of color, and many speculate that it may have been pandering by Disney company to play into progressive America. Past attempts at introducing minority characters into Disney projects have often led to disappointed audiences based on the character’s limited time on screen and character development.

But once you have seen Eternals, you will see for yourself the grace and depth of this character’s premiere.

The world today has become a battlefield due to ongoing social, political change. As society struggles to get its footing, Marvel heard the call to action and presented us with hope: heroes that look like us.

Representation has never been more important. As people everywhere look to social media, film and TV for motivation, Disney has delivered a variety of heroes from different backgrounds we can relate to.

Let’s break it down. SPOILERS AHEAD…

Phastos shows his skill and intellect with the superhuman ability to create technology that supersedes its present reality. This is an important aspect of the presentation of our first gay superhero.

In the past, “gay characters” have been primarily used as a novelty. They are usually funny supportive characters with a disposable storyline. Generally, they have added very little to the main story arch. In Eternals, Phastos becomes an integral part of the Eternals’ success against the Celestials.

Family is the true power in Eternals. Just recently, we have seen shows and movies incorporating family relationships with gay characters. Generally speaking, in past appearances of gay characters in film and TV, they are depicted usually as fun, single and “fabulous.”

Eternals breaks down the stereotype and shows a home with two fathers caring for their son. Some would call it unconventional, but others will agree it demonstrates the purest form of family and love. Two humans against all odds fighting to keep their home safe and their child loved.

Not to mention, the world is about to end. Phastos shares a healthy amount of screen time with the team and shows he’s a force among his peers. He not only has an elaborate story arc centered around family, but he also builds technology to fight against the imminent danger coming to earth. Phastos brings heart and superhuman power to the big screen.

Marvel has broken down barriers and created possibilities for so many. Queer children will now be able to see themselves in a powerful way. Gay men are not just funny side characters — they can literally save the world.