Yongary, Monster From The Deep 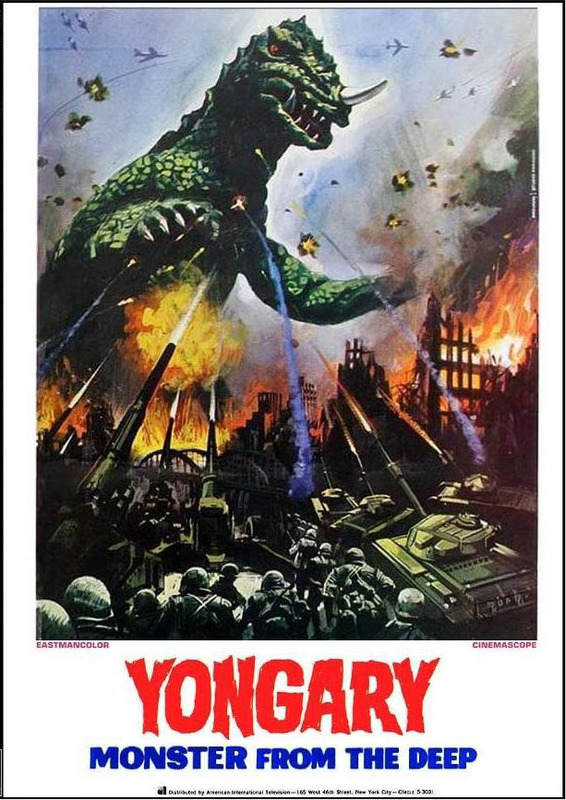 It’s a new year, but much has remained the same. We still have an old man in the White House, mass political unrest, and a newer, deadlier strain of a familiar disease has shown up abroad. Hell, wildfires have even reappeared across Australia. That being said, with the exception of the historic and absurd political unrest, the rest are nowhere near as hard-hitting as last year’s shenanigans. We are used to staying at home for diseases now, the wildfires are not nearly as destructive, and Donald Trump got replaced by someone with subtlety. It’s like the beginning of 2021 is a watered down version of the beginning of 2020, like it’s a rip-off of last year. And what better way to start off a ripoff of a year than to review a ripoff of a movie. With that, I present to you 1967’s Yongary, Monster From The Deep, a South Korean monster movie made to cash in the stupidly successful Godzilla series.

The movie starts out quite unlike a monster movie that usually does, however, with its opening shot being a wedding at a rocket launch center between an astronaut and his bride.  Yes, really. Anyway, after a few minutes, he has to go back into space to observe a nuclear test in the Middle East, but communication is lost, and then restored in a few minutes, resulting in him landing safely. Oh, and there’s a giant oil-eating monster wrecking South Korea or something.

Already you should notice a problem with this movie, that being the first third of the movie, which is most of the previous paragraph. Not only is it nonsensical and boring, with the impromptu-space-nuclear-bomb-watching-mission taking a million years, with a radio malfunction to drag it out, but it’s also extremely long and barely necessary to boot. This opening third still barely explains Yongary’s origin (We never know if he was a mutant or born as a fire-breathing monster), and it takes away from what could have been valuable time to build up to Yongary’s rampage throughout Korea. The only thing it really does is introduce the main characters (Most importantly scientist Illo and his annoying nephew Icho.) but it could have been done in a less painstaking way.

Luckily, both the movie’s plot and entertainment value pick up real fast when Yongary begins to burrow around and show himself.  Most of the movie after the half-hour point is a standard Godzilla-Esque rampage, with some interludes from Illo and Icho as they figure out the monster’s weakness to ammonia (Why ammonia, I don’t know).  The scenes of destruction are fairly entertaining, and are the highlight of the movie, although it’s obvious that the buildings’ Yongary smashes are hollow. There are also more than a few flaws in the Yongary costume itself, like a visible fire tube for Yongaries fire breath.

There are also some bizarre scenes during his rampage, such as some truly laughable matte shots, and a scene where Yongary starts inexplicably dancing to surfer music when woken up by Icho. This lighthearted scene is heavily contrasted by Yongaries death, which is disturbingly realistic for a fairly milquetoast monster romp. He literally convulses and starts bleeding rectally! I remember this surprised me when I first saw this movie as a kid. It’s not often you get a monster death this gruesome.

Overall, aside from a few strange moments (Like the Yongary dance scene and his disturbing death), there isn’t a whole lot to write home about for Yongary, Monster Of The Deep. After the tedious first half-hour, it becomes a fairly decent monster mash in the same style as an early Godzilla movie, but you would be better off watching an early Godzilla movie. If you choose to see Yongary, however, you do have a few options. It’s been released on a fair number of low-cost monster movie doubles feature, it’s in a few streaming services and recently had a blu-ray with a fancy new transfer. It’s also been riffed on the 1st season of MST3k, which you can watch on Netflix if you have it. Either way, don’t expect too much. If you can shut your brain off for 90 minutes, and have some patience, you will find an adequate way to spend some time for those nights where you don’t feel like sleeping.