The Giant Claw: A Silly Movie To Get Your Mind Off Of Things 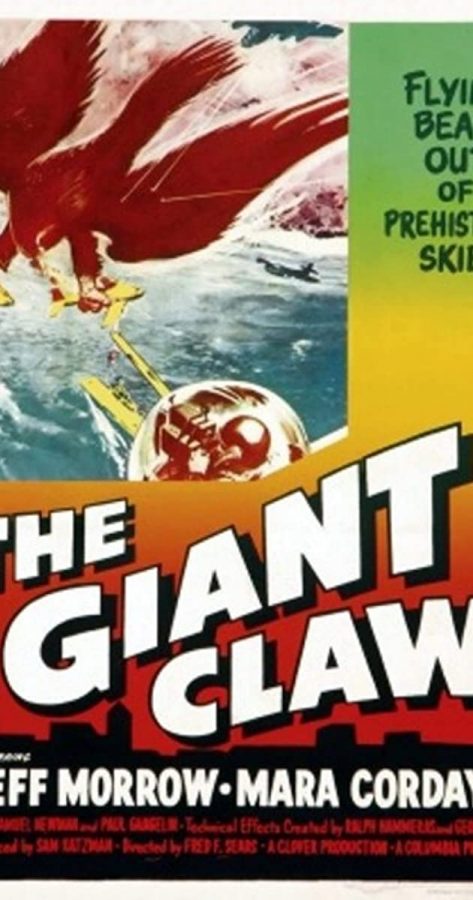 Normally I would start off these reviews by linking the movie to a recent event, but let’s face it, you could use a break from reality.

In between government screw-ups, massive civil unrest, idiots spreading a deadly virus because of Facebook memes, and all the other things I haven’t mentioned, it feels like we’re living in a crappy comedy movie made by nihilist teenagers after they all got drunk and high off vodka and LSD.

Not to mention, with the semester started, I would imagine that plenty of you are stressed out about schoolwork about now.

As such, I want to spotlight a fun movie. A movie that’s stupid and chaotic, but in a lighthearted and entertaining way instead of the brand of chaotic stupidity that currently infects the world. And few movies allow for such stupidity than a monster movie. With that, I present The Giant Claw.

The Giant Claw is a movie that starts out decently enough for a movie of its type. It’s about electronics engineer and occasional test pilot Mitch Macafee (played by Jeff Morrow, who apparently went home and got drunk after the disastrous premier) and a few other 50’s stock military personnel types as Mitch spots a U.F.O. during a flight. Eventually, planes start falling out of the skies, their crews vanishing into thin air, with the culprit being a flying monster.

The plot is fairly generic, but completely functional.

For the first 20 minutes of the movie, the buildup to the monster is pretty well done for this type of movie, and Jeff Morrow and his co-star Mara Corday do ok jobs playing their characters. All in all, the movie at this point seems to be on its way to being a decent monster movie.

Until we see the monster.

I make no exaggeration. I say that the title monster is without question one of the goofiest and stupidest looking monsters in movie history. For those of you who haven’t googled to see what it looks like, just imagine if the coco puffs bird got bit by a zombie, complete with oversized nostrils (with nose hair!), google eyes, a Mohawk, and crooked teeth, as played by a stiff marionette.

Whatever you are thinking of is still probably scarier than what was actually put on screen. It is shocking that something that laughable would be put into a movie, and I am convinced that whoever designed it was either an insane genius or very drunk.

But, Big Birds design is only half of what makes it such a memorably bad monster.

Later in the film, after it has already gone on a worldwide rampage, we get a backstory for the buzzard. After analyzing a feather from the monstrous muppet, we are treated to a scientist explaining that the monster is not only extraterrestrial, but flew here from billions of light-years away, somehow not dying. And the best part is that the buzzard doesn’t just come from space, but from an antimatter galaxy, and to top it off, is made of antimatter. Not only that, but when it’s pointed out that the bird would explode if anything hit it because it’s made of antimatter, they then explain that it has a force-field that protects from injury!

To recap, the movie’s monster is a Giant antimatter space buzzard that looks like a muppet found in Jim Henson’s trash can that is flying around destroying planes, trains, and automobiles, along with a large chunk of New York City during the film’s climax.

It’s genius. It makes other strange quirks, like the fact the monster is apparently flying in a spiral (as shown by Mitch drawing a spiral on a map), seem downright tame.

This is also a movie with no self-awareness too.

The actors, as I mentioned, do a decent, if not great, job (Although the dialogue is almost half as silly as the bird). They all react to the buzzard with complete horror, since none of the actors knew what it would look like during filming and were forced to use their imaginations.

Thus, their horror is played with complete sincerity. All of what I have described is played completely straight. This helps the movie transform from just another b-movie with a silly monster into a comedic masterpiece. The fact that they are treating this dumb bird with the same gravity as a nuclear attack is hysterical.

Even better, unlike many other giant monster movies of its era, which usually have a ton of boring filler, this movie flows at a decent pace, ensuring that once the bird is seen, you will see it again very soon.

In the end, the silly bird puppet gets more than its fair share of screen time, as well as the exploits involving the bird and the other characters, which are entertaining in their own right.

In the end, The Giant Claw is the quintessential 50’s b-movie. It has everything from a goofy rubber monster, to nonsensical science, to an attack on a major city. It’s just a whole lot of fun, and luckily easy to watch, as it is available on YouTube, and has been released on dvd numerous times if you want a psychical copy.

If you want a silly movie to take the edge off for a bit, then you will find few better at the job than The Giant Claw.